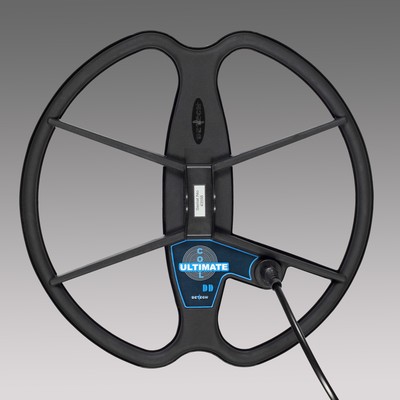 People who use the Garrett AT PRO since a long time know very well its potential. With the stock coil, a DD “Smudged” 8.5”x11”, you have very good performances on different soil conditions. Obviously you cannot expect “spectacular” results from a coil that, even if very well designed, is made for general purpose treasure hunting, and fits well to beginner and expert users at the same time. It has a good depth, good target separation and, after all, it is not so heavy.

But what could we do if we want some more?

Here they come some third party manufacturers, especially from East Europe, that started making some alternative coils that could be mounted on the Garrett’s hi-end VLF machine. We, at AMD Tech Team, have already tested and reviewied a couple of them with very nice results. Now is the time to test the Detech Ultimate 13” DD, flagship coil of the Bulgarian company run by Eng. Rumen Kanev…

We’re talking about a very well known coil that is already available for lots of detector models. But the one for AT PRO was missing in the list and thousands of Garrett’s aficionados were literally begging for it.

Famous for its depth, stability, light weight and target separation, will the AT PRO version of Ultimate 13” keep the pace of its “sisters”?

Well… let’s check it out together!

REAL “ON THE FIELD” SEARCH TESTS 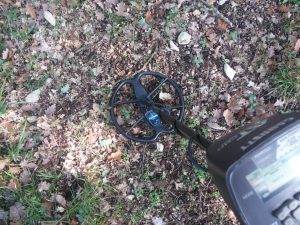 As usual, my tests initiated with some real in-the-fields hunts, to start taking confidence with the new coil in a everyday situation.
After assemblying the coil and turning on the machine, I’ve immediately noticed its sensitivity, since the AT PRO was more “nervous” than usual when keeping the coil in the air. No problems guys… Just put the coil close to the ground and it will immediately become stable and quiet even with maximum sensitivity settings. Yet I’ve appreciated its light weight that will balance the machine in a very comfortable and less fatiguing way. Everybody knows that the AT PRO (with its stock search head) is slightly unbalanced toward the coil, probably to counteract the water buoyancy when submerged. Even though the Ultimate coil is a relatively big coil, 13 inches (about 33 cm), it is still light weighting thanks to a smart combination of composite materials.

With the Ultimate coil on, you will be able to sweep for hours without being fatigued, having a very pleasant and more productive and longer lasting hunting session. Its field coverage, obviously, is definitely much better than the original stock coil, allowing us to detect in a very accurate way even without very close overlaps. A very interesting feature of the Detech coil, especially with high sensitivity settings, is that it has a great periferic (outbound of coil’s diameter) ability to detect targets. This will allow us to find lots of targets even if we don’t strictly pass over them. It’s easy to understand how our productivity will increase with this superior, well above the average, extra sensitivity.

During my “live” searches was neatly evident that signals intensity, compared to the ones from the stock coil, was significantly more intense, strong and solid, allowing me to find deeper targets and in a easier way. The beautiest part is that this enhanced strength of signal is equally shown even on very small and tiny targets. And this was really unespected from such a big coil like the Ultimate is.

There is also a very important feature I would like to focus on, especially for expert users.

Garrett AT PRO expert users know that its capability to show a VDI identification on its display is limited to a certain range of depth. If you go over that maximum depth, even though the machine is still able to play a sound when detecting a target, it won’t show any VDI on screen. This capability of emitting a tone without VDI, with the stock coil on, is usually limited to a couple more cm on a average coin-sized target. Beyond those 2 cm the machine will stay absolutely silent and definitely will miss the deep target.

Not only the Detech Ultimate 13” will sensibly push the limits of the VDI depth range but, and this has really amazed me, the “extra depth” (sound only – no VDI) sensitivity zone will be dramatically greater!

You can imagine, especially if you’re a seasoned hunter, that this will give your machine an incredible depth power.

Keeping in mind that the Ultimate 13” is a circular shaped DD coil, I was expecting a worst target separation compared to the narrower stock oval smudged coil. Not only during my real on the field hunt I’ve experienced I was really wrong thinking that, but I had several other confirmations from my Controlled Test Bed analysis. I’ve also noticed that, using AT PRO’s Iron Audio feature, the Detech coil tends to emphasize NON FERROUS targets that are close to FERROUS ones. What a great feature!!!

As I usually do, I’ve taken my Garrett AT PRO, with both stock and Ultimate coil, in my private test bed. It is based on mineralized soil (mostly emathite) where I’ve buried some 20 EuroCents and some other older Italian Reign coins some years ago, at different depths.
My readers are already very familiar to this test environment, so it will be easier for them to have some comparison references. 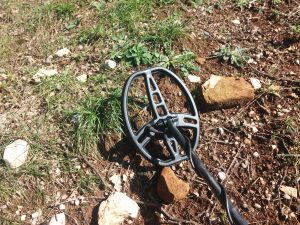 My first depth test involved a 5 cm deep coin. Of course both coils passed the test in a brilliant way. Well, we could expect that.

The second test, with a 20 EuroCent coin buried at 12-15 cm  together with a iron nail, started to show the differences between the stock and Detech coil. Even though they were both able to detect the coin, the Ultimate signaled it in a significant stronger, cleaner (and with a more solid and stable VDI) way while the stock coil produced a more dirty sound with a dancing VDI.

The biggest performance difference was highlighted when I’ve tested the machine with a 28 cm deep coin. The sweep movement was also made difficult due to a natural sort of small step in the soil. Usually this creates some extra difficulties to big coils that tend to hit the small step not allowing a smooth sweep action.

The stock coil, on 80% of the sweep passes, was NOT able to detect the coin staying completely silent, while on the remaining 20% the AT PRO was faintly sounding it as FERROUS. 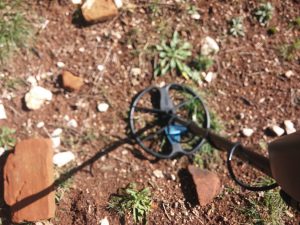 The Ultimate 13”, on the contrary, was able to detect the coin 90% of the times and to correctly identify it as NON FERROUS for, at least, 40% of the times.

Moving on my second test bed (with different mineralization) I’ve verified that the AT PRO, with stock coil on, was able to detect coins from 5 to 20 cm in a correct way but it gave a wrong identification on a 25 cm deep coin.

The Ultimate, as you probably can imagine, was able to give correct identification on all three coins with a very bold and solid signal. 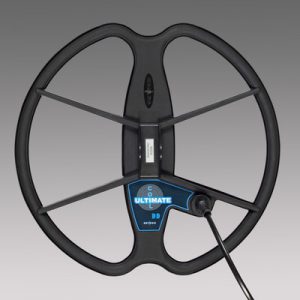 My last tests, as a tradition, were done by covering the buried coins with highly mineralized bricks.

For your information, these bricks are so mineralized that are identified as FERROUS targets from metal detectors. The stock coil was “blocked” even when testing it with the 5 cm buried coin (covered with the mineralized brick), while the Ultimate succeeded to pass the test in a very clean way.

To “stop” the Ultimate I needed to check it with the 12-15 cm coin, with a close iron nail, once again covered with the same ultramineralized brick.

The AT PRO version of the Detech Ultimate, in my opinion, still keeps faith to its undisputed fame of a powerful, light, deep, and very good target separating coil. I would warmly suggest it to everybody who wants to add several “real” depth centimeters to their Garrett machines, without sacrificing the hunting pleasure and the ability to handle trashy soils. Of course, people who hunt in very “narrow” places or really extremely trashy areas, maybe could think that the Ultimate is a little too big to fit their needing but, for any other detecting environment, believe my words, it will be absolutely a top performance coil.

PS The test coil was gently sent to us from Detech Bulgaria.
I would personally like to thank Daniel Matei of Detech Romania for his precious support
For more informations and current prices, please contact your local dealer or check the Detech Website (www.detech-metaldetectors.com) to find the closer distributor.