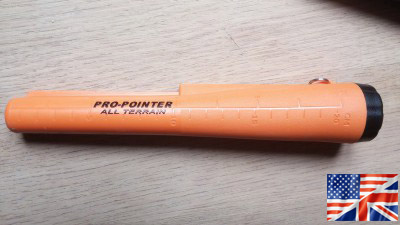 As announced last week, Securitaly (one of the official Italian Garrett’s distributors), kindly sent us a sample of the new  pinpointer made by Garrett Metal Detectors: the Pro-Pointer AT.

Compared to its predecessor, named Pro-Pointer, that had an incredible best-selling success, this new model is not only different in color, with an ultravisible orange, but it also introduced new exciting features that, in my humble opinion, could not be missed in a top of the line device like this.

Being lucky enough to own, with great satisfaction, the old Pro-Pointer too, I had the chance to test the “Old” vs. the “New”. 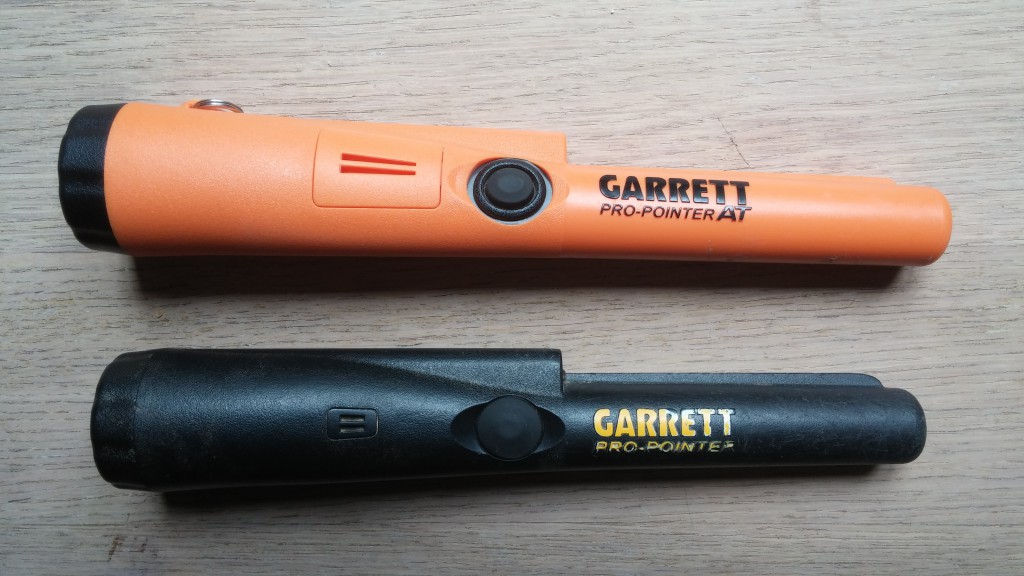 By just taking a glance to them, you could immediately notice their dimensions are identical but something has being changed. First of all, the Pro-Pointer AT is fully submersible in salt or fresh water up to 3 meters!
The old Pro-Pointer was simply  weatherproof and could be easily washed under fresh water.
The On/Off/Operation button is now slightly smaller and it’s now completely safe to be submerged. Another small difference is about the loudspeaker cuts that now are bigger than the old one.
A very useful Pro AT new feature is the little metal ring that could be easily laced to your belt to avoid losing it and a handy depth scale, carved on the pinpointer body, with inches and centimeters.

Touching the Pro AT plastic, it will feel solid and robust. If we put the “two brothers” on a weight scale, we will have another pleasant surprise: the old Pro-Pointer weights 193 grams, while the new Pro-Pointer AT is only 172!!!
You may think that those 20 grams are a silly issue but, taking in consideration you have to carry a metal detector, digging tools, maybe a water bottle and other heavy gear, being as light as we can is always a pleasure. 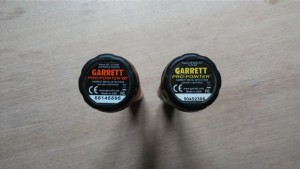 By pushing the On/Off/Mode button will immediately turn on the Pro AT (please, let me shorten its name this way) as quickly as in the old version. The unit is immediately operating retaining the previously saved settings. Settings? Yes! This time Garrett has followed the last years trend and allowed the new pinpointer to be set in different ways according to user’s preferences and needing. Non only we could now choose if the Pro AT will both sound and vibrate when detecting a metal target, but with a couple of clicks, we could exclude the sound and have the vibration only, for completely silent use. And this is not the only new exciting feature! We can now set the pinpointer to three different sensitivity levels, according to our preference or to adapt the device to soil’s condition.

Ending this descriptive introduction I could also confirm the presence of the white LED, very useful in low light conditions, that seems to be a little bit brighter that the old one, and I’ve also noticed the emitted pitch is a just a little lower (in frequency) while the old one was higher. 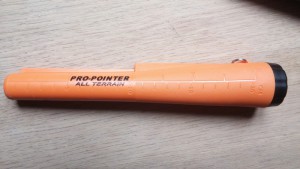 Using the new Pro-Pointer AT during treasure hunting is a real pleasure. Garrett sells it together with a handy holster, that  could be hooked to your belt, your treasure pouch or, as I like to do, to one of the arm-rest wings.

During my “live” tests, I’ve found the Pro AT very precise, reactive and effective in every condition. The progressive sound, introduced in the classic Pro-Pointer, is always useful and now, with a greater sensitivity, has become a true necessity.

I’m sure lots of people is still wondering: “But why? Why that funny orange suit?”

Simple… Remember that the new Pro-Pointer AT is completely underwater usable. Now think what could happen if, unluckily, it would fall from your hands into a murky water. Would you prefer it to be black and invisible as the old one, or vivid orange and ultravisible to let you find it back in a more easy way?
Even using it in woods and forests, having a very visible device is always handy.

For numbers fanatics I’ve made some controlled on-air measurements to demonstrate the Pro AT performances compared to the old Pro-Pointer and also against the Makro pinpointer and the Deteknix XPointer I’ve reviewed a couple of weeks ago. 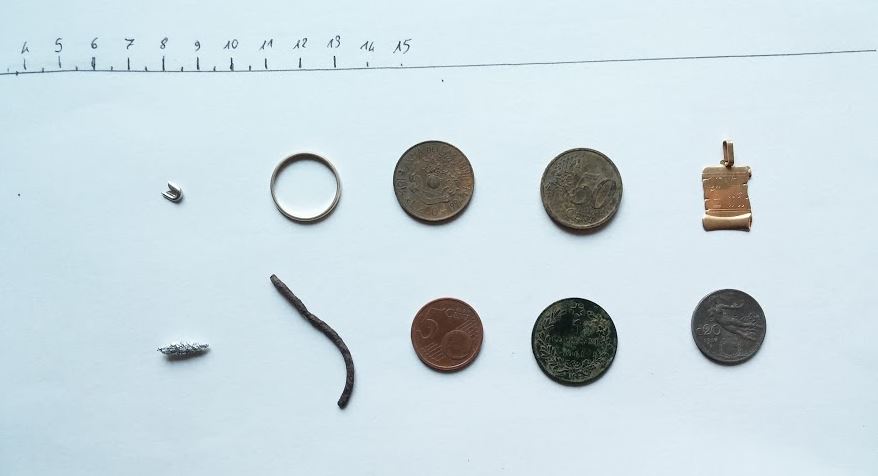 Here we have some tables with the measurements (in centimeters), related to some common targets I’ve used in my previous tests with other brands’ pinpointer. This will somehow “standardize” the test.

With GREEN, YELLOW and RED boxes, I’ve highlighted the 1st, 2nd and 3rd best measurement for each examined target.
As you can see, the new Pro-Pointer AT (set with MAX sensitivity) is on 1st place with 70% of the targets. It is on 2nd place with 20% and only on 1 target (a little bit of aluminum foil) it’s ex-aequo with the Deteknix XPointer and the old Garrett Pro-Pointer not detecting it at all.

If we now analyze the differences between Pro-Pointer AT and its predecessor, the figures are even more impressive! 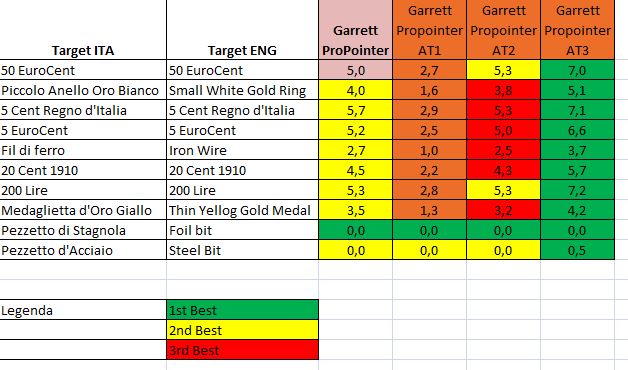 As you may see, the Pro AT beats the Pro “Classic” with 100% of the targets (when set to MAX sensitivity).
Take a look at the performance with a 50 Eurocent coin: 2 cm deeper!!! Incredible!
It’s somehow curious as to the complete lack of sensitivity of Garrett’s pinpointers to small bits of aluminum foil… Hallelujah! 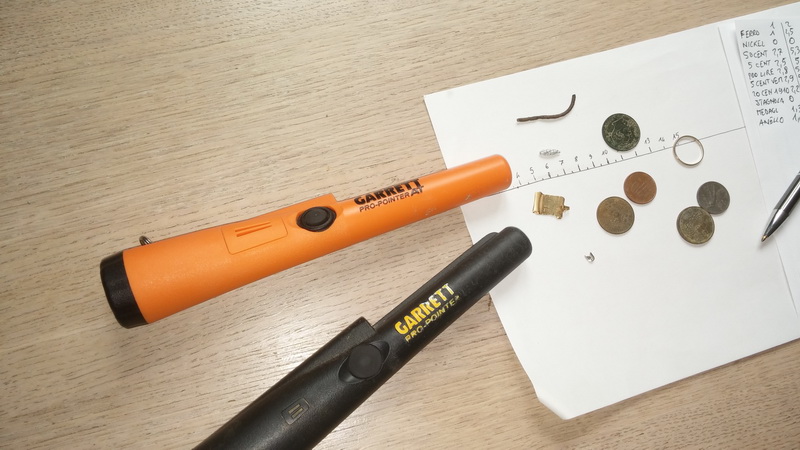 So, at the end of my review, all I could think about the new Pro-Pointer AT is definitely positive. I wasn’t able to find any evident defect or weak point. It is handy, robust, light, precise, versatile, very sensitive and powerful and it’s updated too.
Maybe it is not the cheapest pinpointer but, believe me, it really worths the money you pay and possibly the best choice for a top quality product.

PS.
Many thanks to my dear friend Tim Suggs from Birmingham (AL) for checking and correcting my poor English.