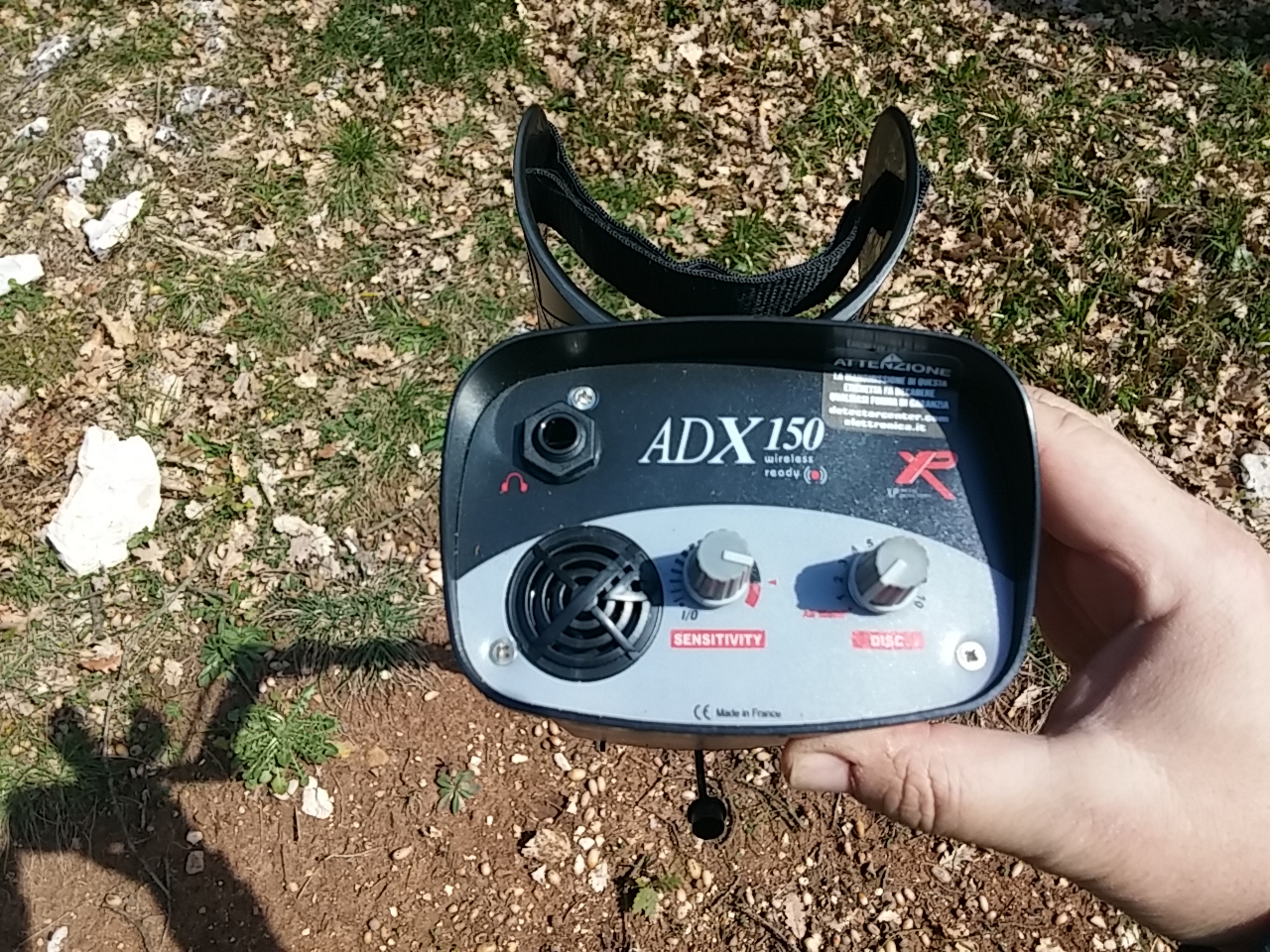 Spring has finally come and rainy days seem to have gave us a little peace. I was impatient to go back on the field because, as you may have read in the blog, during this period the AMD Tech Team was literally “loaded” of metal detectors to be tested and reviewed.

In between all those machines that were kindly sent to us, we had the XP ADX 150, distributed in Italy by Detector Center of Cervia. It’s the entry-level machine from the French manufacturer XP that, till now, was somehow a little bit neglected in comparison to its “major brothers” GoldMaxx, Mito, G-Maxx and, obviously, top of the line DEUS machine.

As we speak, XP brand is usually tied to its medium-high and hi-end models and it’s easy to forget their lower end products, especially the “little one” ADX 150…

The ADX 150 is a single frequency (4,6 kHz) VLF/IB Motion machine, display-less, single-tone, automatic ground balance, with linear discrimination and sensitivity controller by just two simple knobs. It has and external loudspeaker, a wire headset jack (6.35mm standard one) and it’s ready to be used with XP wireless headset (you can buy it as a spare component) thanks to its internal circuitry. 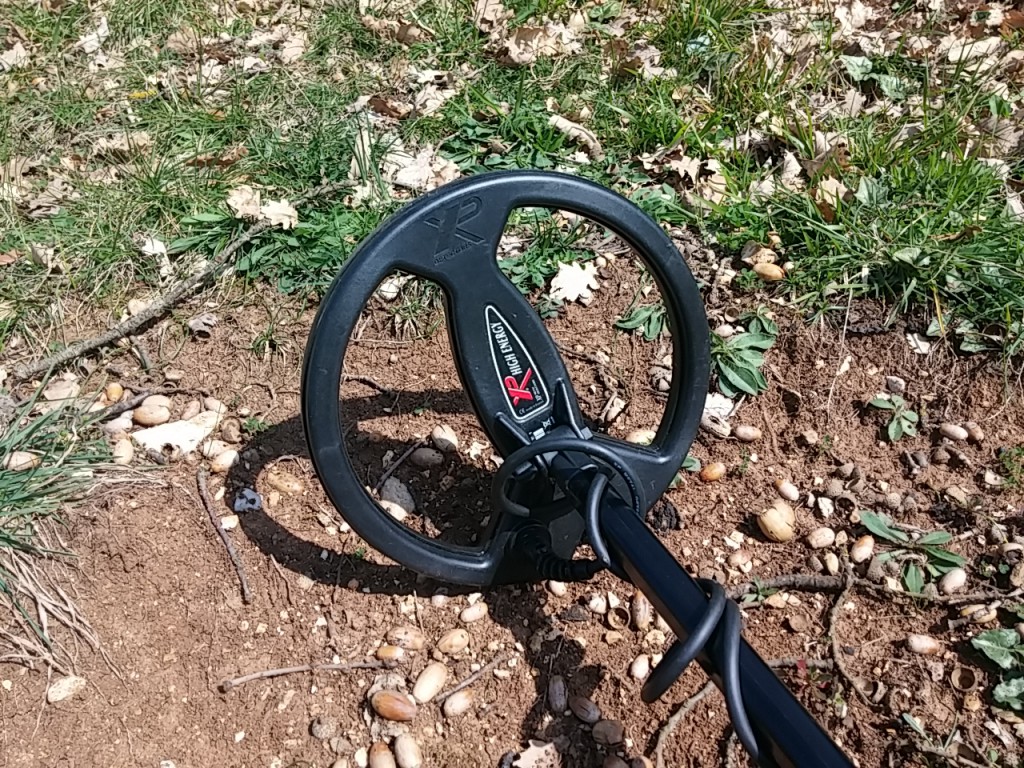 Opening the box you will find the control box, the telescopic stem, a 9”” DD round detection coil with its coil-cover, a useful and ruggy control box nylon protection, a strap band, and a easy-to-read manual. Accessing the Italian distributor web-site, we can see the ADX 150 is sold in bundle with an extra coil (10”x5” DD with coil cover) and an wired headset for something more than 400 Euros. Of course International sellers may have different prices and may or may not sell the same bundle offer.

Assembling the ADX it’s just a matter of seconds. After mounting the coil with fiber nut and washer, you just need to extend the collapsible stems to adjust the unit to your comfort and secure them with the camlocks. I’m sure that most of you have recognized in this model the innovative DEUS stem system that XP decided to apply to their last generation models. However, this is one of the best mechanics ever produced (some companies started to imitate that!) so we are so happy Mr. Alain Loubet (XP’s CEO and Chief Designer) have chosen to apply it on every XP model.

The Control Box, a very similar if not identical to major models one, could be bayonet jacked to the arm-rest stem. Following XP tradition, you could detach it and hipmount the unit thanks to a very long connecting cable.

The ADX’s weight is just 1.483 grams (3,36 pounds), batteries included that will allow you around 50 years of detecting. When hipmounted your arm has to bear just 950 grams (around 2.10 pounds) so we can boldly state that the 150 is a true “feather weight” machine. 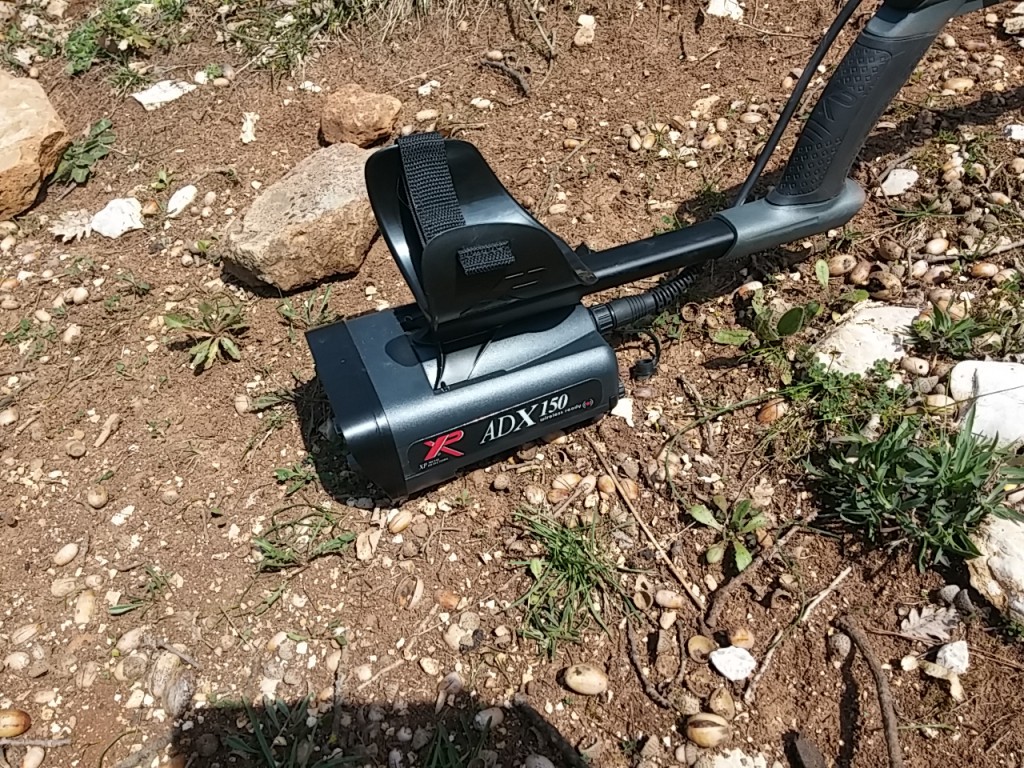 You just have two analogic knob to manage: Sensitivity (that also will allow you to turn on and off the unit) and Discrimination. For beginners, but not only for them, they are more than enough. 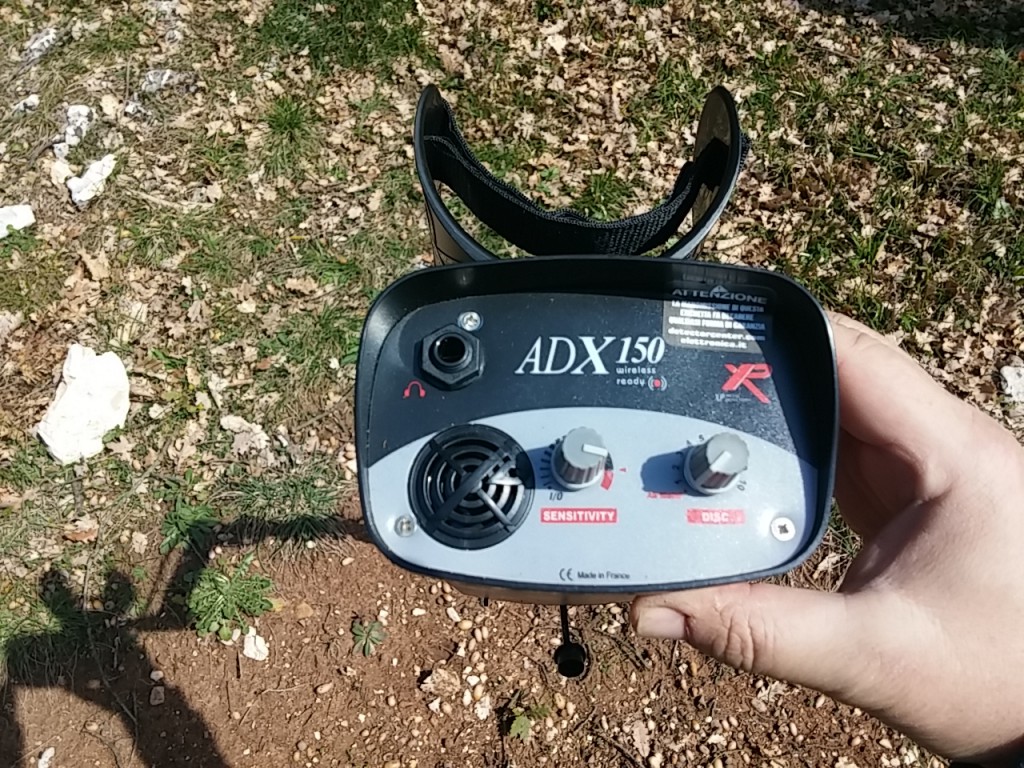 … Some beeps tell us the machine is turned on and the battery’s ok. Since now, the ADX become very silent and it won’t sound any threshold tone. To be ready to search you will just need to set the Sensitivity knob to the highest possible level before the unit becomes erratic and, for an ordinary use, set discrimination between 4 and 5. This will allow the machine to completely discriminate from iron up to aluminum. While setting Disc to 4 will produce a “stripped” sound on aluminum tin-foil, putting the Disc knob to 5 will completely cut it out. Anyway it will let pass more conductive metal objects like “not-so-thin” gold targets, bronze, lead, copper, brass, silver etc. 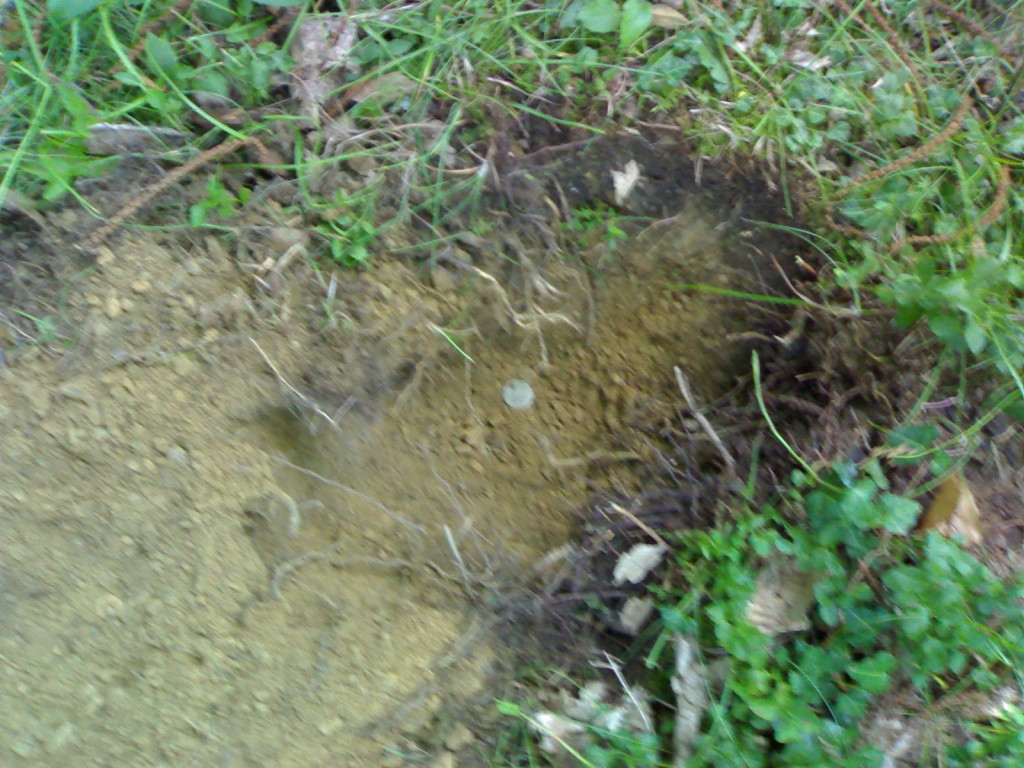 The first thing I’ve noticed was the amazing machine’s stability, even with high sensitivity values, the ADX will stay silent and steady. You can quietly set the knob in the “Red Zone” without having too much problems apart from some sporadic, but easy to be recognized, false signal. Anyway I suggest, to be safe, at least on your first hunts, to keep the Sensitivity slightly before to the Red Zone: you will have a very good setting for depth and incredible stability.

Its operating frequency, 4,6 kHz, will bias its performance toward high conductivity, not so tiny,  metal objects made of copper, bronze and silver even though, thanks to its compact size coil, it has great sensitivity on small targets too, as I had the chance to verify that on my true searches. ADX’s low frequency will also help to keep it stable and performing on heavily mineralized soils.

I’ve taken the detector on a heavily hunted-out field, where I wasn’t expecting to find anything else. So I was really amazed to see the ADX, thanks to its natural agility and extreme recovery speed (XP style!), allowing me to find some more good targets without digging iron. 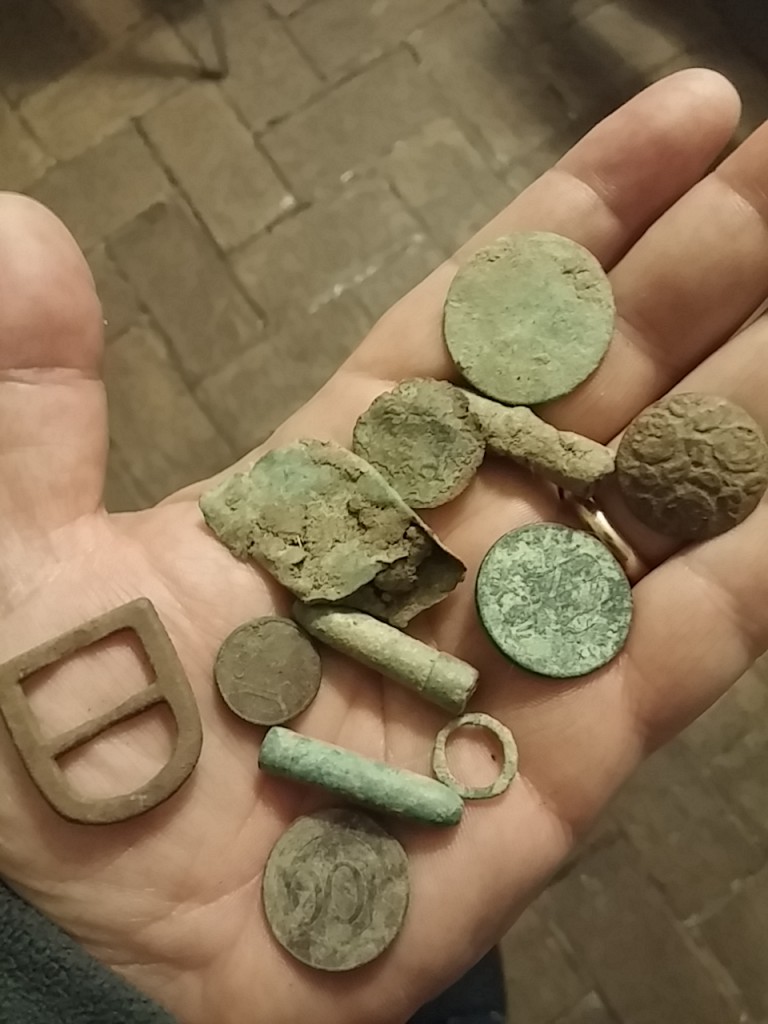 Thanks to its light weight, recovery speed and the coil’s compact size, the ADX 150 can be swept in a quick way, allowing the user to “sniff” even very tight places. Those features will also be a great benefit for long treasure hunt sessions or on very steep soils. It’s definitely a “GO GO GO!” for anyone who’s looking for a feather-weight machine that could be stuffed in a backpack and also used in the mountainside.

The above mentioned ultra-fast recovery will also be incredibly performing to separate good and bad targets in a very efficient way. Also, when you will find a good target near an iron piece, its sound will be easily recognized as somehow “metallic/robotic”.

Since the ADX 150 is a single-tone machine, you will need to be a little patient to learn its nuances to gain the maximum performances.

Real search depth is really good, or even better, somehow excellent on coin sized targets, especially for its price.

Target centering is very precise, even though the ADX doesn’t have an embedded pinpoint mode. Luckily its reactivity will allow you to obtain a very narrow target position.

At the end of the hunting days, with a very good booty, I wasn’t feeling tired at all. It was a truly pleasant sensation that granted me a very relaxing experience.

As usual, I’ve done some controlled tests with the ADX 150 on my test bed. It’s a medium-highly mineralized soil where I’ve buried some 20 Eurocents coil some years ago. They are at 5, 15 (this one with some iron bits nearby), 20, 25 and 28 cm deep (this last one has a natural obstacle with a sort of small step that inhibit a wide sweep). 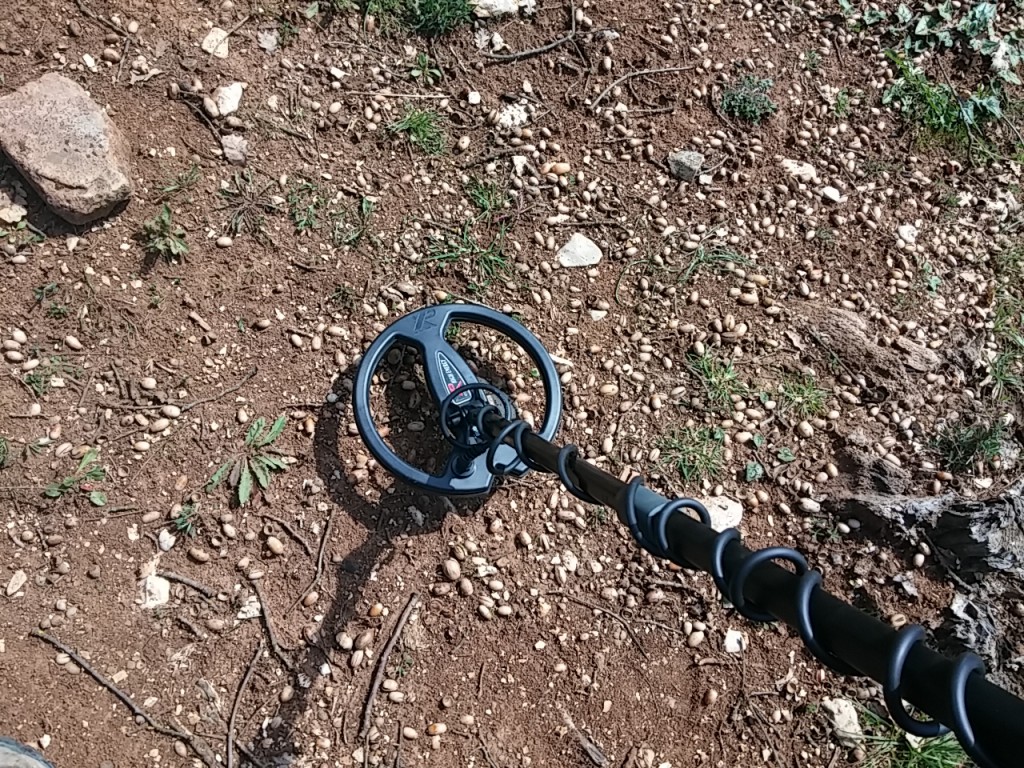 Of course the 5 cm deep coin is detected in a very bold way without any hesitation. The one at 15 cm posed no problems to the ADX even though, as mentioned before, the sound becomes more “metallic”, letting us to know that there’s something good near an iron piece.

At 20 cm, on a more mineralized soil, the machine hadn’t any problem at all, even without “pumping” the sensitivity to the max. On the 25 cm buried coin, the detector had to surrender but, to be honest, just a very few high-end models are able to get that target. 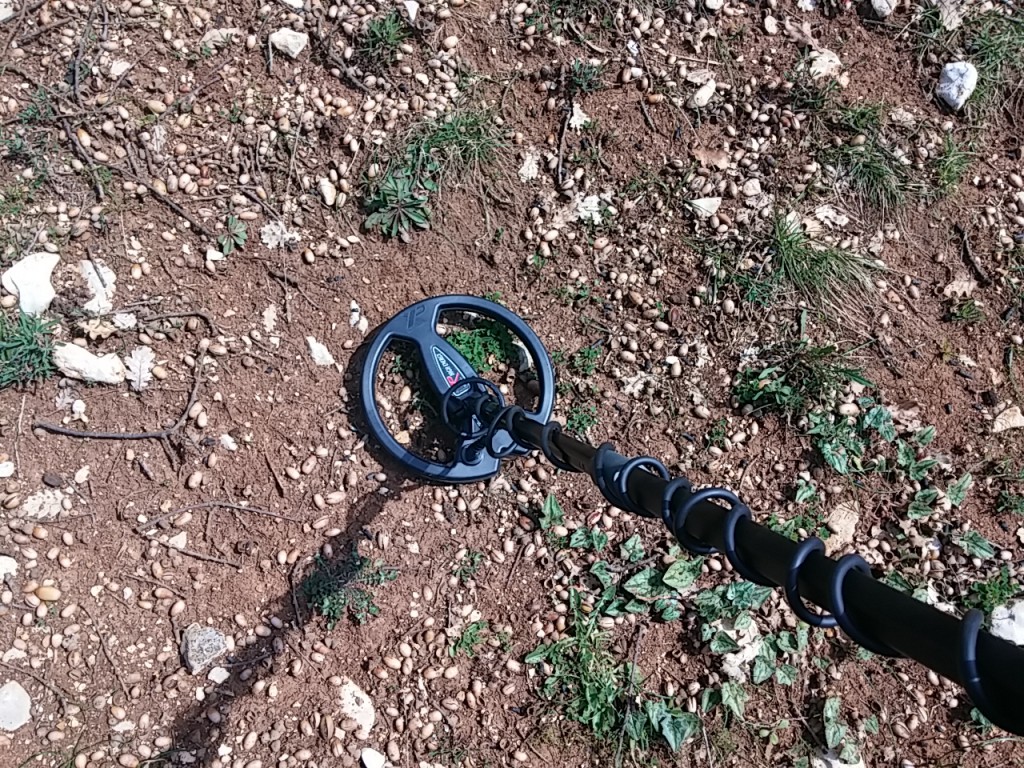 The coin buried at 28 cm was on a milder mineralized soil (the one of 5 and 15 cm targets). The main issue is the uncomfortable natural “step” that will keep you from an easy and good sweep, especially if you use a big coil. Luckily the 9” ADX 150’s coil succeeded to catch the tough target (in a weak way) but I needed to push its Sens near the maximum (at the maximum level the machine seems to have its RX circuits saturated on that soil, so it loses some depth) and with a reduced discrimination.

Thinking it’s an entry level machine with a very affordable price, we could easily say that its performances are very tied to the middle-to-high level model ones.

I’ve also done some tests with different mineralized bricks covering the same targets. At 5 and 15 cm I had no problems: the ADX goes very well.

Using a very mineralized brick, the ADX wasn’t able to detect the coin. Once again, only a very few hi-end models could do that.

Using the ADX 150 was not just a pleasant and fun hunting experience but also very surprising. I wasn’t expecting to reach those performances levels with a entry-level machine, especially for its stability and discrimination capability. The XP, at least on common opinion, never focused too much on a very strict and rigid discrimination or, to be more precise, had always a peculiar perspective on that comparing with the USA and Australian manufacturers’ way of designing machine.

So I was really surprised to notice the ADX has a very aggressive discrimination, maybe because it was aimed to beginners treasure hunters, who need some help not to dig too much trash.

If you want to start this hobby with a very simple to be set, ultra-light, fun, performing and, not to be forgot, not so expensive machine, you should considerate the XP ADX on the first place… You won’t be wrong!